Mestre Moa do Katendê, Romualdo Rosário da Costa, 63 years old, was stabbed in the back, 12 times in total, after an argument with Paulo Sérgio Ferreira de Santana, 36, at a bar near his house, on the night of the Presidential (and local) elections in Brazil.

It is said that an argument started when Moa do Katendê said he voted for PT, while Paulo was a Bolsonaro supporter. After the argument, Paulo allegedly left and returned around 20 minutes later to ‘Bar do João’, in Dique Pequeno – Salvador, with a knife, stabbing not only Moa, but also his cousin, Germinio do Amor Divino Pereira, 51 – in his right arm. Germinio has survived the attack.

Paulo then ran away from the bar, but was caught by the police who followed a trail of his blood (he had cut his finger during the attack) to his house, where he was found hiding in the bathroom. According to the police he had packed a bag and intended on running away. Paulo said had been living in the area for two months and was having a discussion with the bar owner when Moa and his cousin became involved.

According to Moa’s brother, Reginaldo Rosário da Costa, 68, this is what Moa said to Paulo, during the conversation: source

You are black like me, open your eyes, learn history and you’ll see we are running the risk of loosing many
things we fought hard for. You are young, you don’t know how much I had to fight to get to this point.

We weren’t arguing, but talking about politics, because it was a subject of interest to my brother. Not to the point of arguing because he was a man of culture, not of fighting, and he ended up dying as a warrior, fighting for us
Reginaldo Rosário da Costa, Moa’s brother

Moa was a reference of our culture. He founded Afoxé Badauê in 1978 and contributed a lot with Ilê and to all the black community.
Antônio Carlos dos Santos, Vovô do Ilê, president and founder of Ilê Ayê 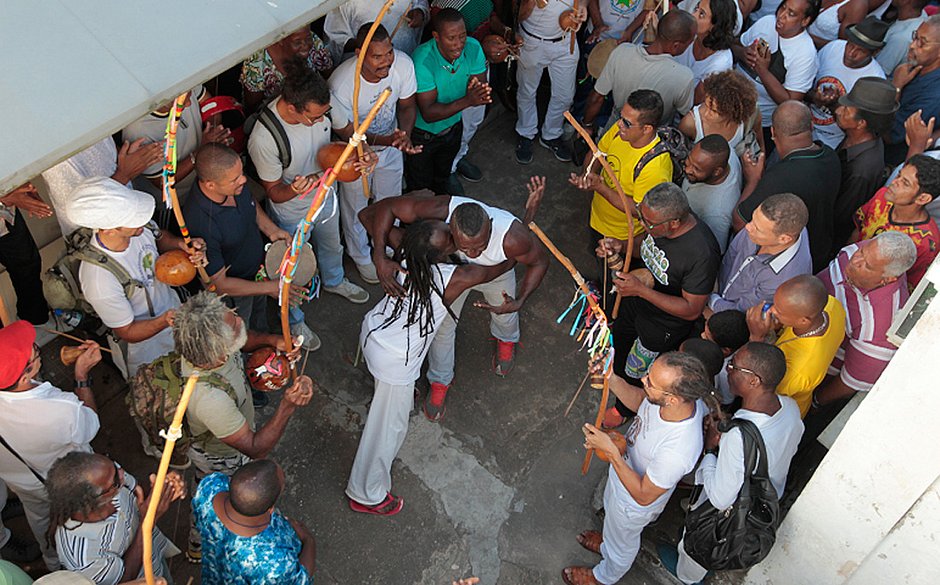 Friends and family said goodbye to Moa with with music and capoeira (Foto: Arisson Marinho/CORREIO)

============================================
Interview with the accused, Paulo Sérgio Ferreira de Santana. He says Moa called him ‘black and gay’… Let’s just for one second go with this (very unlikely though, given Moa’s level of consciousness and enlightenment) – even if that was true, how does it justify Paulo going home to get a knife and stab Moa to death???? Paulo denies the murder was politically motivated. It was certainly premeditated, it was certainly murder. He could have just gone home and stayed there.

This senseless murder has deeply shocked and shaken us all. There are countless tributes to Moa on Facebook & Twitter. A very troubling murder. No doubt a result of the politics of hate and fear that’s been taking hold of the world in recent years. What is even more troubling – this is also a symptom of ‘divide and conquer’ politics. A black man, unaware of his own culture, siding with the oppressor: in favour of more guns, harsh punishments and believing that being called ‘black and gay’ are mortal insults which justify murder (as per his interview)

Moa made the world a better place, he will not be forgotten.

Last year Mestres Moa do Katendê and João Grande visited London together and I had the privilege to meet him. This video shows his visit to Mojuba Group:

Mestre Moa do Katendê singing, dancing and enchanting at the 7th Capoeiragem, 2018

#Brazil October 7, will be remembered not only for the victory of the extreme right-wing candidate Jair #Bolsonaro in the first round of the presidential elections, but also for the cowardly and brutal murder of Romualdo Rosário da Costa #MoaDoKatendehttps://t.co/0u8eSgLKxM

2 thoughts on “Moa do Katendê’s murder”