London streets were deserted on my drive to the Dance Attic. I love it when London is like that. Mestre Poncianinho had been telling everyone that Mestre Roxinho was coming to visit and he said a lot of people were saying they were going to be away or that they couldn’t come because the Victoria Line was not working. At which point he would say ‘But Mestre Roxinho came ALL THE WAY FROM AUSTRALIA!!!’ – to make the point that missing such a Mestre because of a family meal or the London Underground was kinda lame!

I got there at the usual time, around 6:30 and there were about 10 people in the room. I’m always surprised that the Dance Attic opens for so many days of the year (good thing) but I didn’t see anyone I didn’t know around. So I thought maybe Mestre Roxinho wasn’t going to come and it was going to be a very quiet class.

About ten minutes later Mestre said Mestre Roxinho was coming but he was late. So he set up a bateria and started warming us up. Then he left the room and came back with Mestre Roxinho and his companion. At this point the room was PACKED! I ‘guesstimated’ 80 people.

I don’t know if it was me, going through some challenging times in life, or maybe it is precisely the intended effect: but for the first time I actually felt the connection between Capoeira and real life – in a way I can’t put into words. Everyone who’s been doing Capoeira long enough knows the feeling.

He said he was going to feed us tonight (metaphor for teaching us) and that if we digested the food tonight, ok, but he thought some of us might still digesting this food in years to come. So from that came a promise of a very content rich class. But he also said you shouldn’t eat more than you can digest.

Mestre Roxinho (born Nov, 1969) is Mestre Virgilio’s student. His father, Espinho Remoso, was of the same generation as Mestre Pastinha/Mestre Bimba and was one of the regulars at Mestre Waldemar e Pastinha’s roda.

So, as promised there was food to digest. A lot of it still swirling around my head. I have been doing capoeira regularly for 6 years and I still find it hard to execute pre-planned things in the roda. I have learned not to try and plan my game beforehand and go in with a clear mind – enjoy the games that are played before me. But also tonight Mestre Roxinho spoke about having some sort of plan or aim. Being Capoeira, the aim is to always in some way ‘catch’ your opponent, otherwise you’re just dancing. This in turn requires some sort of game plan and intention. Setting a trap requires manipulation of the other and this requires forethought and premeditation. So, balancing the clear mind before entering the roda with a game plan takes years of practice. The game plan clearly becomes second nature, an instinct, and it’s formed as the game develops. Hence having 60 second games is kinda pointless as you’re just kicking blindly. Like a punch up. Whereas the longer games are more like chess. (the paragraph above is just me digesting what Mestre Roxinho said)

Mestre Roxinho used the analogy of language rather than the chess analogy. So, he says his body is his mouth and also his ears. The Capoeira game is a conversation and he speaks with his body. And of course, the more fluent both players are the more of a conversation there’s going to be. He said that if you end up playing with someone who is basically just kicking mindlessly (i.e. equivalent to shouting) the best thing is to not give them attention and just basically get out of the way of the kicks with negativa, rasteiras. Eventually they will tire out and you will have retained your integrity and not escalated the situation. So, calm is one of the most important things in Capoeira – anyone who’s been practising for a while knows that rule. And you don’t always have to react or answer a challenge. For someone like me, who isn’t exactly calm (excitable) and who likes to give answers straight away (I like to instantly solve problems), learning this kind of discipline in Capoeira is invaluable for the roda AND for life. And that’s when I started having a series of epiphanies about my own life. Because they are personal and because I’m still not sure I can actually put them to words, it’s more a feeling – that’s all I need to say about this realisation.

In terms of Capoeira, I still have A LONG way to go until I start getting a vision of my game, until I can actually remember my games, they are usually a bit of a blur. But when I hear Mestre Poncianinho and other advanced capoeiristas, they have an extraordinary game memory and remember a lot of detail from not only their games, but other people’s too.

His game had very little acrobatics, a very traditional Angola game. Most of it was about timing, impeccable timing. This once again, had a direct analogy to life. He said you need to keep trying and trying, until you get the timing right. Capoeira is basically trying to get the perfect timing so that the trap works and you get your opponent. But the ‘enlightened capoeirista’ will do it with charm and not try to hurt anyone. He also uses his facial expressions A LOT to add to the game and to connect and communicate with his partner in the roda. He also used the fishing analogy a lot, always be fishing for the perfect moment. Fishing = setting traps.

Some bits I filmed

Mestre Poncianinho posted this on his channel

I filmed this one at a different event but it’s one of the best games I’ve ever seen in person in my life! Mestre Roxinho & Prof. Boneco 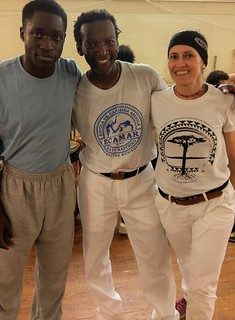 Mestre Roxinho, one of the few Mestres I have met of my own generation.

‘Capoeira Angola Historia, cantoria e versos‘ by Mestre Roxinho, 1st Edition 2011 is written in both English and Portuguese. It gives an overview Capoeira Angola’s history but its main focus is on Capoeira songs, their meaning, context, when/why they should be sang… So I’m making some notes here, relevant to my learning, there’s lots more in the book!

Corridos to indicate a game should be on the floor
Jogo de dentro, jogo de fora – Vamos apanhar a areia – Angola e

* Tira daqui bota la, Idalina
Players should return to foot of berimbau, restart the game and make it faster, more technical and precise.

NOT to be sang when a Mestre is in the roda, it’s disrespectful!
Ai, ai aidê – Sinhô São Bento (Essa cobra lhe morde) – Baraúna

Good songs
Quem quiser me ver – A onça morreu (when game is dominated by one person) – Uma volta só (towards end of the roda, from then on games will be short) – from there follows a list of songs for the roda.